Caffè Calabria, a coffee shop down the street, serves what may arguably be the best brew in town. With plenty of competition nearby, we keep fairly loyal to their coffee offerings. Meanwhile, a friend shackled to an 8-year veterinary program in Sacramento has their beans shipped north to resupply her kitchen, refusing to buy from anywhere closer. Now that’s fucking loyalty.

A two-trick pony, Calabria is also locally revered for their Neapolitan-style pizza. Normally, the gravitational pull of good pizza is strong enough to overcome temporal and spatial obstacles, but the siren call of scrumptious, everyday late-night, undemanding pizza of URBN always sounds when I enter North Park (full disclosure: dating the head bartender and I swear it’s not for the pizza). It took a post-marathon splurge fest for Calabria to finally get a chance to show off its chops. 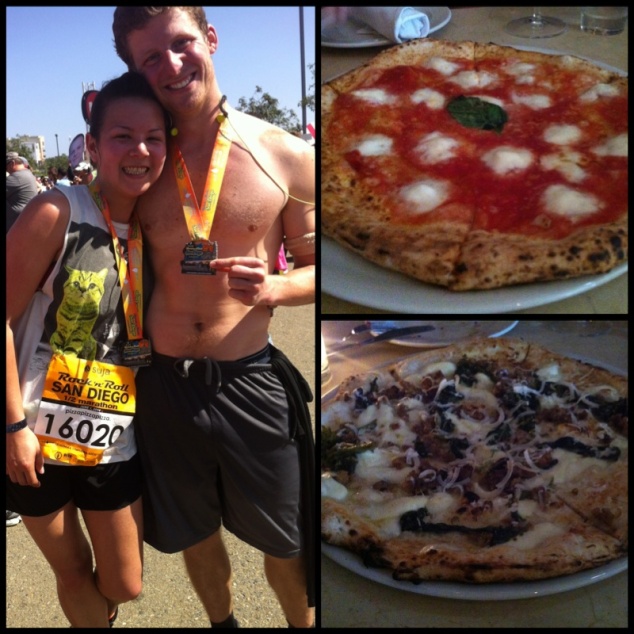 After finishing a half-marathon, a bottle of Dom, a nap and a couple margaritas, the persisting treat-yo-self mentality drove us right through the doors of Caffè Calabria during operational oven hours (the woefully selective range of Wednesday-Sunday, 5-11pm). Unfortunately, dear reader, social gallivanting and the high of accomplishment made note-taking futile. Left blankly satisfied, I wanted for a more attentive go at their Margherita DOC (requiring actual certification for the privilege of the full title) and the Italian-focused wine list.

Calabria does what it can to keep true to the Neapolitan style of pizza-making right down to the oven, constructed by third generation oven maker Stefano Ferrara, of Naples, Italy. They have, however, mostly abandoned the fight for the classic fork-and-knife method of pizza noming, automatically slicing each pie on its way out. From the belly of the 700+ degree oven comes thin crust pizza, “wet” with a oozy center. With slicing, some vigilance is required bite to bite to maintain proper topping-support posture, a problem that could be eradicated if only we had evolved as a tool-making species. 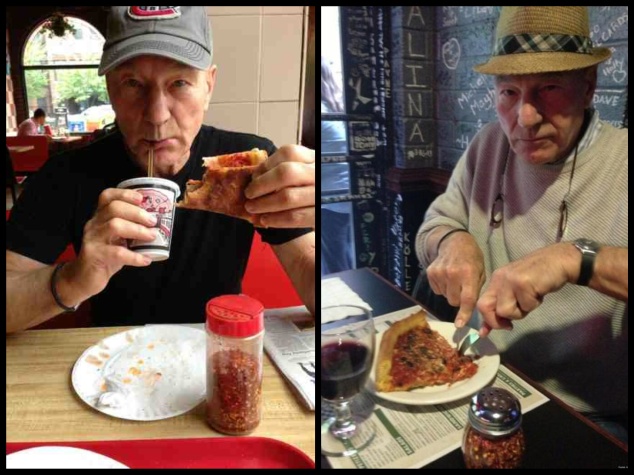 The following visit was a solo venture with choice of pie inspired by a recent wine tasting class on Alto-Adige, the northernmost region of Italy. Close ties with bordering Germany have influenced the wine culture here in intriguing ways. Seemingly ubiquitous, Pinot Grigio takes up little more than 10% of vineyard space while varietals like Schiava, Gewürztraminer & Legrein also count themselves among the most important. The same phenomenon is true of the cuisine. Speck is a fantastic example of these cross-cultural influences, marrying the southern traditions of Italian cured meats, such as prosciutto, with smoked meats of Germany to the north. Piqued by this newfound knowledge, my pizza selection featured speck, complemented by caramelized onions, gorgonzola, and a smattering of basil leaves.

Toppings were scattered in such a way that, bite to bite, the chances of revisiting the same flavor profile were dim. Some bites were smoky with speck or sweet with caramelized onion, some charged with gorgonzola and others left vulnerable and dull without a sauce for cheese to cling to. My only gripe was with the mild under-salting, one of those fixable problems, and the scant amount of basil used. The latter is a common peeve of mine that has always left me raw, but I am a practicing adult and can cope.

Without an offering of Alto Adige wine by the glass, I plucked a glass of Frascati (Fontana Candida, Frascati DOC, 2011, $6 BTG), one of many DOCs from the Lazio region in central Italy (think: Rome). By itself, this dry white, consisting of minimally 70% Malvasia, balances aromas of juicy pear, lemon oils and yellow apple with a touch of slate minerality. It maintained crispness without sharp, elbowing acidity, making it pleasant even without the accompaniment of food (a quaffer, as Karen MacNeil would say). The pairing’s most surprising aspect was how the clean and fruity nature of the wine emphasized the smoky elements of the speck and brought out a nutmeg aroma in the sauce.

However successful, the in-house pairing did not made me forget about the Margharita DOC I had only become casually acquainted with before. With a twinge of hunger on a night to myself, I made the necessary phone call and took off into the night to witness its birth firsthand.

Calabria recommends eating their pie hot from the belly of the oven, but the setting, however romantic, isn’t conducive to a pretty picture (specifically with my crap camera phone). Or an off-list wine pairing sans corkage fee. Or an episode of Parks and Rec. Just trust that I drove home like a mad hatter to get this pizza party going.

For a double-punch pairing, two styles of Piedmonte wine sat waiting: a chardonnay from a classic Barolo producer (Ettore Germano, Langhe DOC, 2013, $21) scooped up from Village Vino and a lightly-chilled dolcetto (Pecchenino san Luigi, Dogliani DOCG, 2012, $13) from San Diego Wine Company. The chardonnay offered slight butteriness with a refreshing background of tart lemon and apple. The creamy bufala mozzarella amplified an already richly present wet stone quality. The dolcetto, despite the name (in Italian, “little sweet one”), was dry but deeply aromatic with tart fruit aromas of blackberry, plum and black cherry mixed up with a dry soil component. The plush tannins were emphasized in the presence of pizza, but the heat, ranking 13.5% abv, overwhelmed the quieter toppings. Although the two weren’t completely incompatible, they certainly didn’t make for a memorable pairing. While the chardonnay matched up well, a lighter style of dolcetto may be more suitable, such as with a DOC like d’Alba or d’Asti, where the minimum alcohol requirement is a half percent lower at 11.5%. Taken in a different direction, the charred underbelly of Neapolitan-style crust seems to want for a bolder, zestier wine to match the smokiness, such as a medium-bodied zinfandel (primitivo, even) or Northern Rhone syrah. And thus the adventure continues.

And if you’ve come this far, maybe you’re willing to go a little further.