To satisfy this week’s requirement of chili, I decided to construct an oily deep-dish bed for this messy American meat stew to get cozy in. Both chili and deep-dish pizza were exotic enough kitchen ventures that, since taken on simultaneously, came with much insecurity and ready cynicism. Even in the final stages of plating, when all looked as it should have, my apprehension did not relent. It was only in that first bite when I realized I had aced it.

Complying to the challenge at all was a big picky-eater step for me. Somewhere in my childhood I developed a rather aggravating fear of beans, thus the idea of chili never thrilled me. In fact, I’d never actually had chili. This may seem an atrocity until you realize I skirted around far worse super American cultural experiences until my mid-20s, like steak, burgers and bacon. Naturally, when I discovered Texas chili is traditionally made without beans, I mustered up some enthusiasm for this challenge. The next step was to learn how to make deep-dish.

Having grown up in a thin crust household and continuing on this tradition with my thin crust-eating future hubs (from Chicagoland, of all places), I have only recently become acquainted with the thrills that can be had while munching on a slab of deep-dish. The experience is usually over too fast, partially due to how damned filling a single slice can be. I remember the jolt of surprise to find that 5 grown adults could not take down a single order of Chicago pie, which I had originally insisted was not enough food. It sure fucking was.

After perusing some online recipes, I adhered to deep-dish guidance offered in The New Best Recipe, an America’s Test Kitchen publication, straying from the template for stylistic purposes. For chili expertise, I combed through many sources and styles before mostly committing to the Serious Eats version, which I preferred for its simplicity and flexibility.

I made the chili two days in advance of the final assembly. A couple days of rest not only developed the flavor, as promised by most every recipe, but allowed me to segment my cooking plans cleanly.

Chuck steak is prized by stewing enthusiasts to be the cut of choice due to the high amount of connective tissue, collagen, which melts into gelatin and gives the meat a more succulent texture. After chopping up a hefty bone-in steak into inch thick pieces, the meat is cooked briefly over medium-high heat until just browned. This step is open to modification according to personal preference of texture. For further guidance, J. Kenji explains his reasoning for a variation in searing. 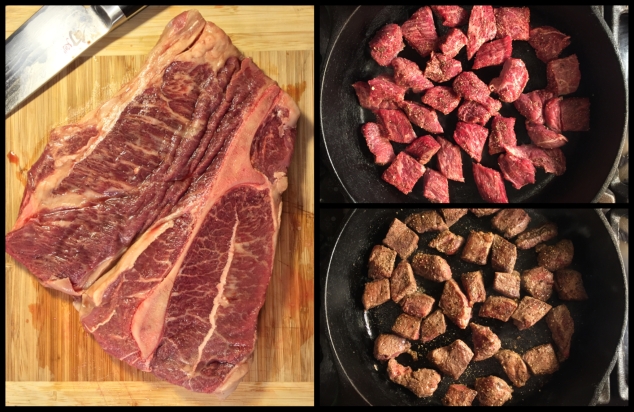 Meanwhile, the whole chili peppers to turn into paste (today: Pasilla and Guajillo) are deseeded and shredded into large pieces. 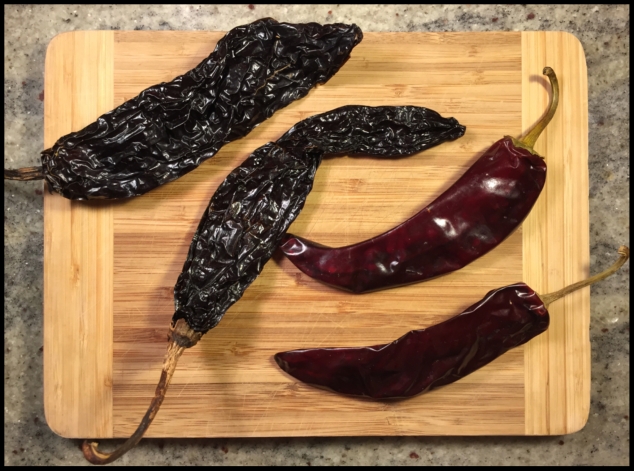 Over moderate heat, the peppers are lightly toasted in a pan for a couple minutes and carefully managed to prevent burning. Using a minimal amount of beef stock, the toasted peppers are simmered for 5-10 minutes before blending. The result: an ugly, yet super flavorful paste.

To gear up for the stew, chopped onions are softened and grated garlic is added soon after, cooked until fragrant. While aware the list of potential herbs and spices used to create the nuanced differences demarcating fervent loyalties between styles is extensive, I chose to use oregano and cumin with a whisper of cinnamon and allspice. Combining in the meat and chili paste, the remaining beef stock is poured in for the long simmer session ahead. 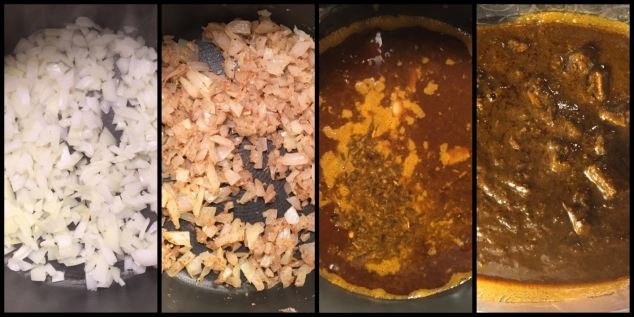 After three hours, the chili is thickened with masa harina, a corn tortilla flour, and salted to tasted. To meld the flavors thoroughly, the chili takes a couple days to hibernate in the fridge, awaiting its next big adventure.

Aside from an unprompted decision to substitute a third of the flour for masa harina, the deep-dish crust is built according to every minute instruction. Everything from the many baths of oil the crust receives to meticulous sets of resting periods to conforming to the detailed oven heating requirements is designed to ensure the best possible outcome with minimal hassle. Such is the beauty of America’s Test Kitchen recipes. 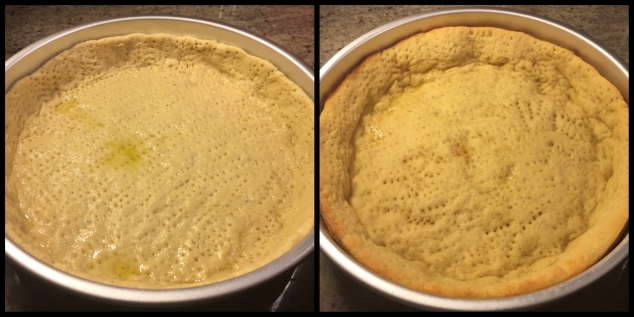 A boiled potato is grated into the crust to provide a springy texture and the crust is baked before topped so as to develop its structure. Giving all that love and attention to the crust pays off by providing a sturdy base for the weight of the chili to rest safely in. For layering, a base of shredded cheddar is placed over the crust first followed by the chili, spread evenly so that chunks of beef can be found in every bite. To follow, another layer of cheddar cheese before cooked at 425°F and finished on the top oven shelf. 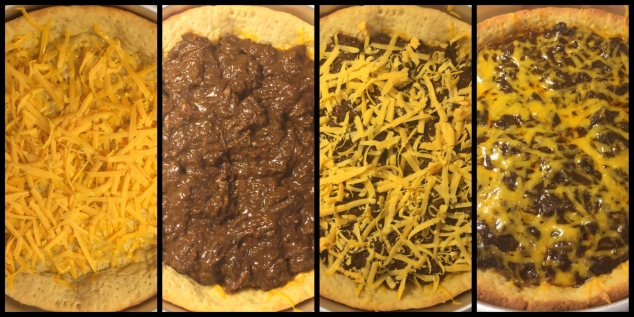 After the final stage in the oven, sour cream and cilantro leaves garnish the top. 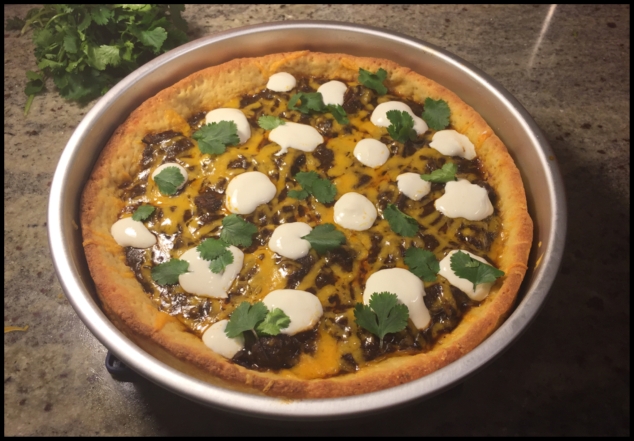 To free the pizza from its pan, some tricky spatula work is required but the pie should be able to be transferred before slicing. 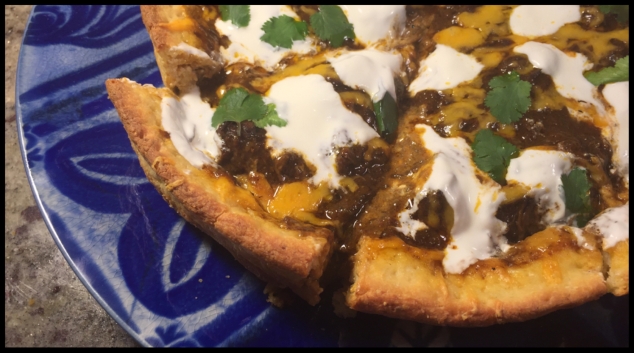 Again, I must emphasis just how shocked I am at the success of this union. Not only did the crust maintain its shape throughout, the flour swap ensured every bite was infused with deliriously blissful flavors of Fritos. The sour cream provides a velvety draping over the intensely savory edges of the chili. The meat is tender and perfectly juxtaposed with the texture of the soft, springy crust.  Altogether, it is immensely satisfying to eat and hard to not completely engulf. Wine could easily become an afterthought, but in this scenario. 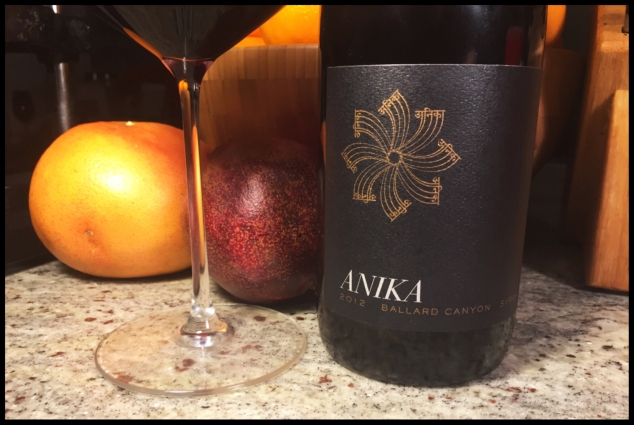 Having consulted the fine people of Village Vino, a boutique wine shop in San Diego, I chose Parr Selections – “Cuvée Anika,” Syrah, Ballard Canyon, California 2012 to pair with this pizza. The youthful purple hues of the wine distract from its actual charm of elegance and balance. The style is reminiscent of Northern Rhône, offering a heady nose of fresh lavender florals with black raspberries and peppercorn on the palate. There is a gracefulness here not often found in California wines. The firm, finely grained tannins contribute depth to the moderate body while dark fruit and fresh leather aromas lead one another in a harmonious duet. 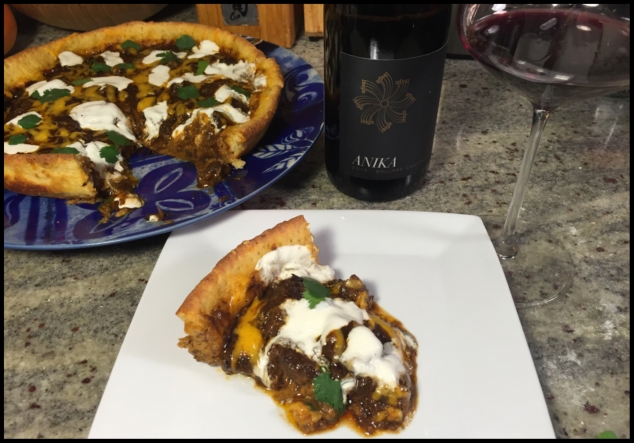 Alongside the pizza, the pairing is playful with just enough power to withstand the long chords of flavors while matching spice with spice and countering savory with fruit. The wine naturally enhances the experience by not only providing a companion for the pizza, but also a chance to catch my breath between bites. Even still, I’m already ready for more.