Exploring the miniature world of pizza-inspired finger food, as decreed by this week’s challenge, I decided to experiment with three different styles to see how far whimsy could take me. To begin, I chose to bring to life a mediocre pizza cone I once experienced at a night market but this time it would be tastier and in bite-size form.

Ideally this project would begin with an army of small cone-shaped, oven-safe items such as a basic frosting tip, at the ready. If this is not the case, the next best option is to create a set of Cones of Dunshire out of foil.

Using room-temperature pizza dough, I rolled out thin, roughly-shaped triangles that were wrapped once around each cone. The cones were baked pointy side up until browning and gently release from mold when cool enough to do so.

To prep for the next stage of cooking, foil was wrapped tightly around a baking dish and gently poke tiny, well-spaced holes for the cones to sit upright in. These cones were filled with a modest layering of fresh mozzarella, marinara sauce, finely chopped pepperoni, more sauce, and shredded mozzarella to top. 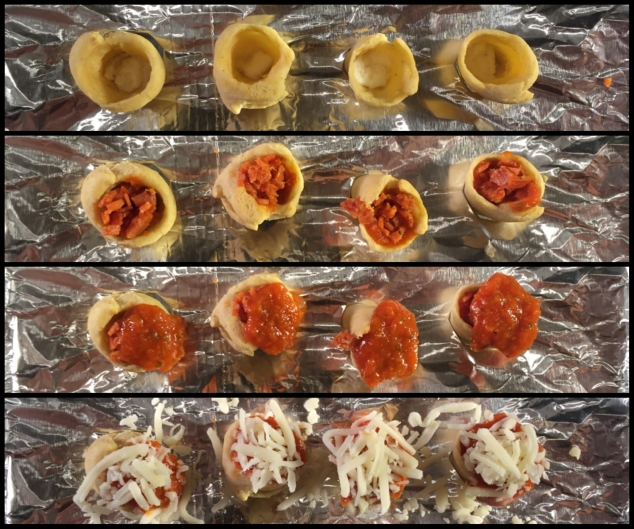 These were placed back in the oven for another 5 minutes and served in the very same delicate DIY foil holder as before. 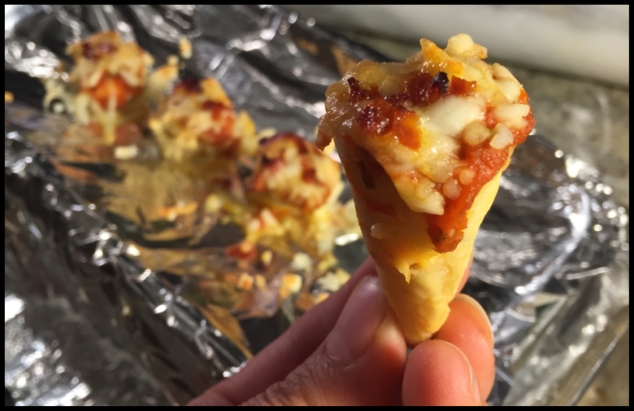 While the presentation is lacking a bit of panache, these small treats have potential for greatness in the future, especially if I combine the piping mousse used in the following finger food.

Gougeres are small pastries that create little air pockets when they puff up in the oven, providing space for a creamy treat to be piped in.

While these might be considered the most successful of my experiements, I encountered many difficulties along the way. Using a very basic recipe provided by the Addison kitchen, I had a batch ready to go within minutes. 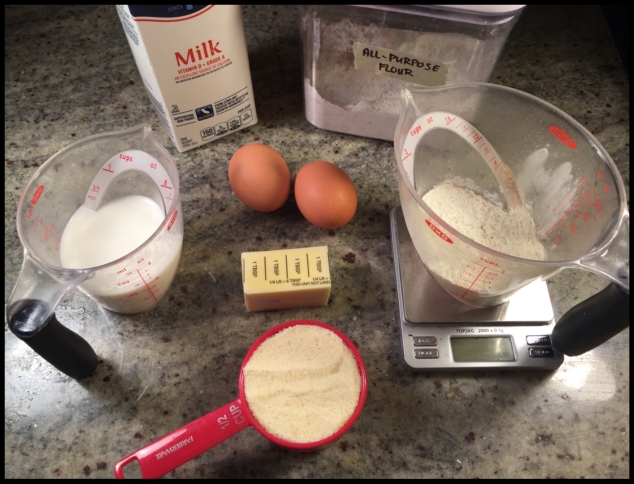 Boiling the butter and milk together, I added the flour all at once and beat the resulting goop for three minutes. Off heat, I whipped in the eggs one at a time and then added parmesan and season with salt to taste. This was then added to a pastry bag, though a sturdy ziplock bag would make a fine enough substitution.

Piping out small swirly poops was my first mistake. The shape created at the base of each pastry did not allow half the batch to rise with the appropriate amount of spacing within. It is better to start with a fat blob as the base, swirling towards the top to avoid a Hershey kiss shape.

Each batch took around 20-25 minutes in the oven before crispy and light. Midway through the first batch, I noticed the color of the gourgeres remained quite pale so I pulled out the lot and painted on a sheen of whipped egg whites for some last minute coloration in the oven. The trick seemed to work so I applied the egg whites to the second batch as well.

While waiting for the pastries to finish baking, I pulled together some pizzaesque ingredients laying around in the kitchen for a haphazard emulsion. The final makeup of this concoction involved a blend of tomato chunks, mozzarella, sour cream, cottage cheese, half and half, crushed red pepper, salt, pepper and crispy pepperoni. This was added to its own pastry bag and piped into the cracks found along each puff pastry to fill the gap within. 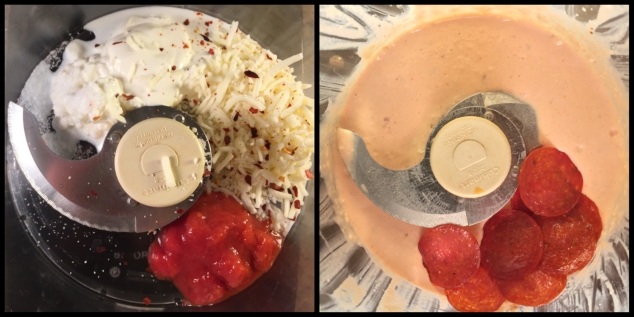 At first I didn’t mind the chunky texture the pepperoni provided until the pastry bag tip kept getting clogged and splattering comically all over the kitchen from force and frustration. Had I made a bigger batch, the end texture may have been smoother as the pepperoni would have a chance to become completely emulsified. In addition, I would avoid using firmer cheeses so that the mousse remains creamy when reheated. Another couple rounds of practice should transform this puppy into a winner in a crowd.

Despite my certainty that this would be the least exciting aspect of my finger food experiments, I devoted a good half hour into this project to use up some leftover dough and ingredients. The majority of this half hour was spent meticulously cutting regularly-sized pepperoni into miniature pepperoni pieces, all for the cutesy look of it.

From here, the dough was separated into equally-sized balls that, when pressed into shape, resulted in 3-inch rounds. And from here I built the pizza as I would any other.

The pepperoni scraps from earlier did not go to waste as they were chopped up and placed over the sauce and under the cheese when designing the final toppings. 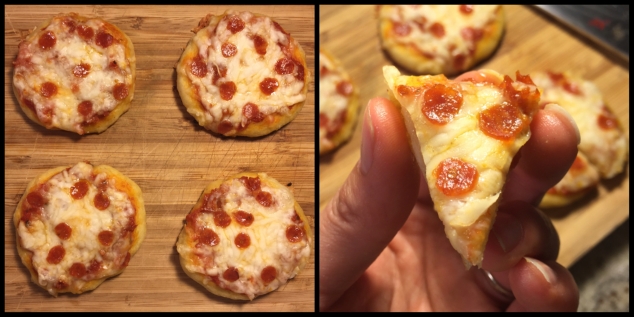 While the flavors of these three treats were very similar overall, I would still need a wine broad enough to span the nuances of spices and texture. When it comes to classic Italian flavors of tomato and cheese and cured meats, I tend to seek out Italian wine.

Vecchie Terre di Montefili – “Bruno di Rocca,” Toscana, Italy 2000 is plush, rich and easy to become friends with. While a decade and a half of aging has definitely pushed this wine into its developing stages, there is still a dense juiciness to the black cherry and raspberry fruit that can manage to the pastry-dense food. The wine’s age offers the additional benefit of extra complexity by emphasizing more savory components like black tea and chopped mushrooms. This wine is just as fun to drink with the food as it is to drink during its preparation.