This week’s reddit challenge of homemade pasta was a bit of a nightmare to get through, but one worth the experience of making pasta by my onesie. While leapfrogging to a beet-flavored pasta may have been unwise considering how many new elements were already being introduced, I couldn’t resist the chance to shed one more item in the fridge so beet pasta it was. 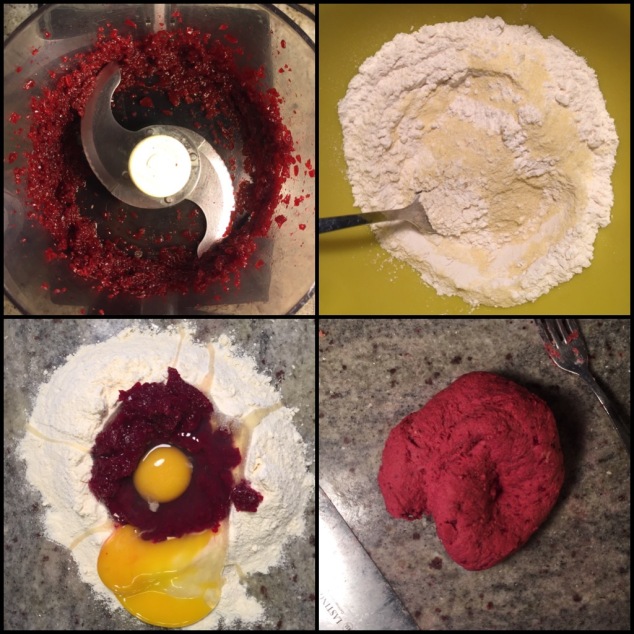 The initial dough making seemed straightforward enough to imbue me with the confidence to tackle a brand new Kitchenaid attachment without reading the instruction manual. 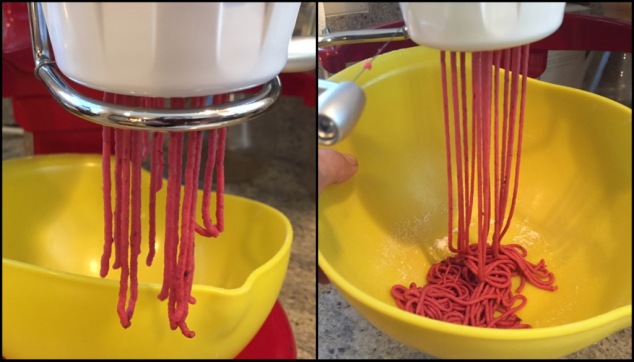 My attempt at producing spaghetti seemed to be a manageable struggle, especially when compared to my macaroni attempts, which were an all out disaster. These first tries were fruitful enough to work with but for the fact that mold took hold of the pasta before the drying process could offer protection.

This is when I turned to a more traditional apparatus for pasta shaping. Cavatelli seemed to be the only shape I was capable of producing, which happened to also be a shape that was satisfying to try to perfect.

But handmade pasta isn’t an appropriate vehicle for perfection, it seems. 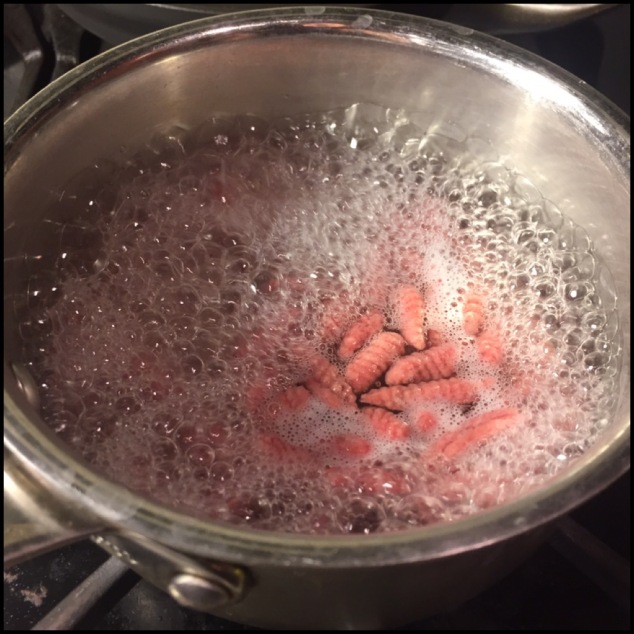 The pasta boiled for just a couple minutes before drained and staged for pizza.

Meanwhile, creme fraiche was enriched with lemon zest and juice to create the sauce. 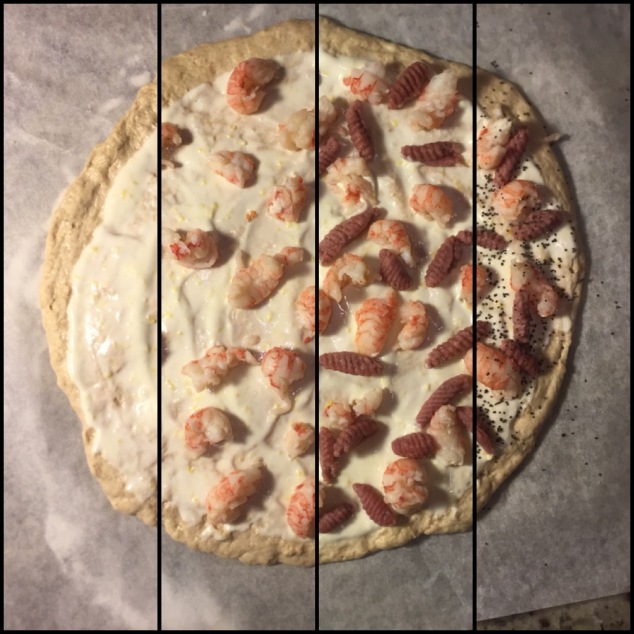 While the concept of carb on carb pizza might seem ridiculous, the layering of interesting textures could be enough to make the entirety make sense.

Fresh chives made for a zippy little addition after the pizza cooked.

And while together the whole pie looks grand, the experience of consuming each piece was underwhelming, mostly due to the delicate textures of langostine and fresh pasta being marred by the intense heat of the oven. Thus, completing the final phase of nightmare pizza. Bonus: also dreamt about the nightmare pizza, thus actualizing the experience.

The one purely positive outcome of this challenge was the wine selected, Matthiasson Chardonnay. Not only was the pairing a solid match, but the wine by itself was tits. That I will highly recommend.

For this week’s rather frustrating theme asking for a dish inspired by a video game, I took on a rather loose interpretation of “inspired by” and decided to make a killer duck pizza to honor Adult Swim’s super rad Duck Game. 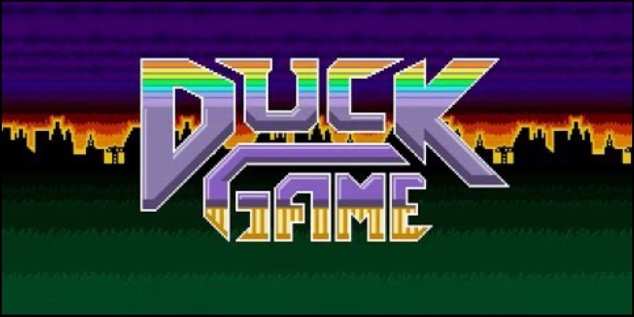 This “frantic fowl-shooting four-player quacktion” won my heart immediately, despite my tendency to not survive the first 10 seconds of each round. Even still, that silly game is so much damn fun to play. If you haven’t yet, get it.

The resemblance my be lacking but the two are made of the same basic yummy stuff. 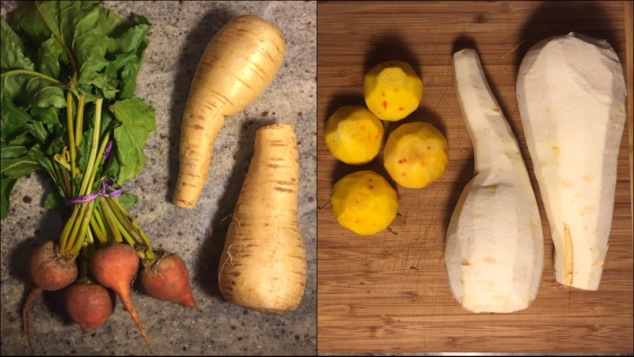 …plus a raspberry gastrique made with cider vinegar and Mancino vermouth.

In my second crockpot adventure, I tossed everything onto a low heat for 6 hours.

The lengthy cooking session may have leeched some vibrancy of color but the flavors are quite rich, especially with the duck fat soaking the root vegetables as they cooked.

The raspberry gastrique made up the base with fresh mozzarella to follow. After the beets, parsnips and duck went down another layer of mozzarella went on top to protect the precious duck followed by a spritz of balsamic vinegar for giggles. 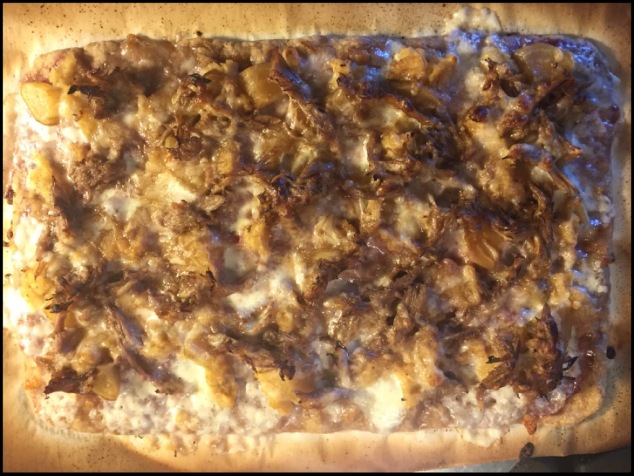 The resulting pizza was fantastic. It was almost as good as playing the game itself, especially with getting to split the experience amongst 4 people.

And for once I didn’t fail miserably. 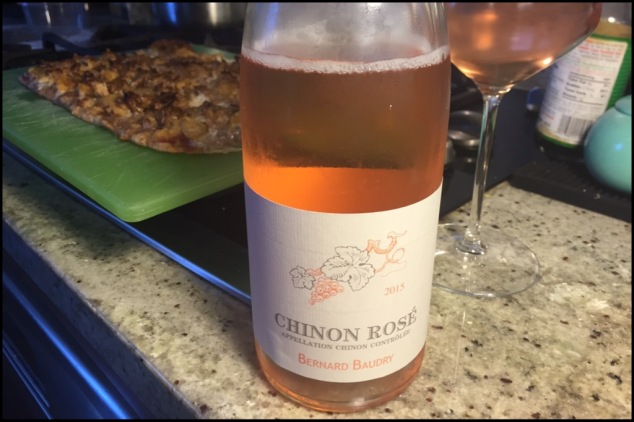 Meanwhile, Chinon rosé made for a delightful little pairing here. Refreshing and dry, the wine added a summertime charm to the wintery flavors.

On a second pass, the smell of duck definitely caught some canine attention. But there’s nothing new about that.

This week’s braising challenge is a considerably useful method of cooking that has only come up in our kitchen when brussel sprouts or potstickers are involved. In the case of the former, brussel sprouts had long baffled us as to how to best cook them without a long roasting process. Braising allowed for a quick sear to create the tasty bonus flavors offered by the Maillard reaction while accomplishing the tenderness sought out at a fraction of the time it would take in the oven.

For this pizza, I chose to discover the braising potential of fennel, a hardy root vegetable that can charm or dissuade any indulgers with its vibrant anise aromatics. Having only recently succumbed to fennel’s appeal, I am still in a rather obsessive phase that peaked this time last year with my addiction to fennel & grapefruit soup. Here, the flavors of fennel and some of its dear friends will come out and frolic.

Sharing the spotlight on this pizza is fennel’s root vegetable buddy, beets. Even in the grocery store, they are already rather neighborly.

With the help of a mandoline, roasted beets were thinly sliced and prepped for a marinade. 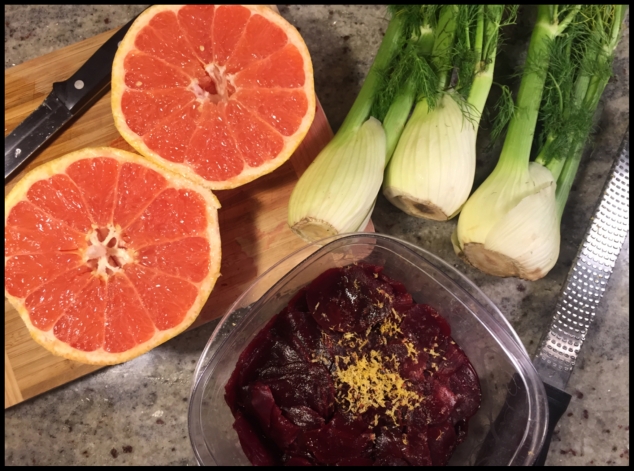 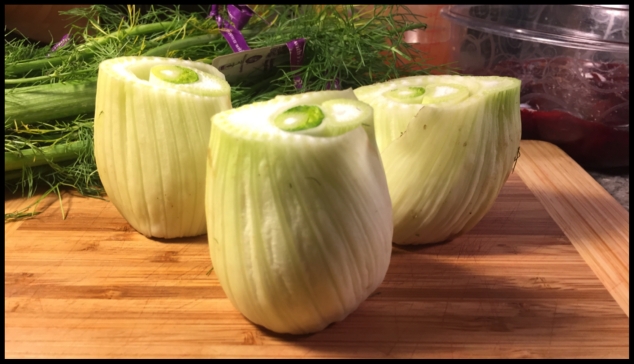 When it comes time to braise the fennel, only the bulbous base was used while some of the fronds were reserved for the final plating. 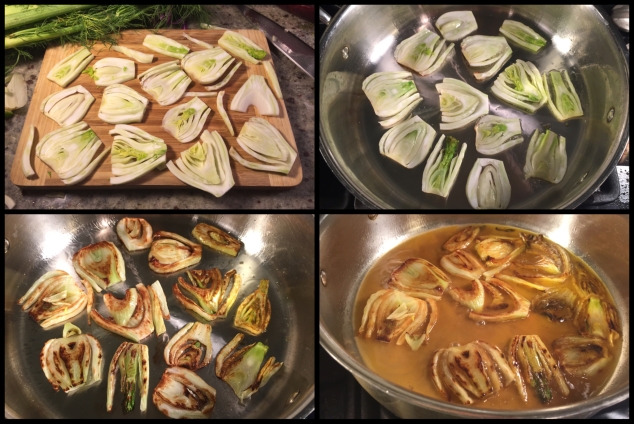 Using a knife this time, I sliced the fennel carefully so as to best preserve the architecture within. During cooking, each portion was flipped methodically with tongs to keep the structure in tact for the final presentation.

The pizza was built using a somewhat puffier crust that had boiled potato shavings folded in for a fluffier texture. The final toppings included the grapefruit-marinated beets, fennel, goat cheese and a sprinkle of mozzarella. Shaved almonds and fennel fronds dressed the pizza upon its completion.

While keeping an array of fun flavors, this pizza lacked a sense of moisture as its creator didn’t think to incorporate some semblance of a sauce. Taking a cue from the clam pizza from last week’s challenge, a quick spritz of the beet marinade may have saved this pizza from its shortcomings. Beyond this, the flavors meshed well enough to be completely devoured, but there was a certain integration lacking. The wine, in this case, helped bridge some missing links in the dish.

Chosen to pair with this pizza, Domaine Eric Louis – Sancerre, Loire Valley, France 2014 keeps a fresh and lively style of Sauvignon Blanc behind its cutesy Little Prince-esque label. Its natural affinity for goat cheese is aligned with a geographic history within the Loire Valley. The region’s Sauvignon Blanc has been enjoyed with the local and abundant goat cheese for so long it seems almost too perfect, and yet it is one of the few true classic pairings that is cherished for its simple dance of tangy, refreshing flavors. The aromatics of the Sancerre pile onto the flavors of grapefruit and herbaceousness in the pizza with a similar roar but the bitterness found in lingering after each bite admittedly might be better managed by the roundness of a slightly off-dry Riesling.

Even still, neither pizza nor wine made it through the night.